So it turns out that white carrara marble counters are all anyone really wants in their kitchen.  You can barely open a design magazine without seeing a kitchen done with white marble.  Of course, given Murphy’s Law, white marble counters are completely impractical for the kitchen (too soft and stainable).  Given this conundrum, I thought it was high time to revisit my original blog post on Alternatives to White Marble Countertops, as it turns out that I left off some choices worth mentioning.  (If you want a discussion of white granites and quartzites, refer to the original post.)  So, without further ado, here is my new and improved list of engineered countertops made to look like white marble.

1) Dupont Zodiaq Okite in Bianco Carrara is bright warm white with a contrasting “vein.”  I do like a higher-contrast appearance, even though this one doesn’t look all that realistic.

2) Silestone in Lyra: I like the contrast and the bright white background, but this one definitely looks like swirls rather than veins. 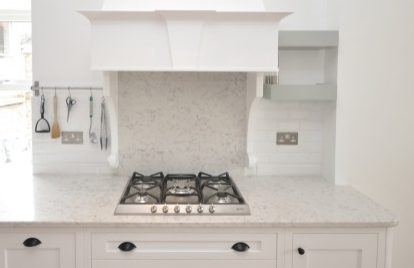 3) Quantra in Carrara: A low contrast surface with grey swirls.

4) Cambria in Torquay: Low contrast, but a bright white background with a realistic-looking grey vein.

5) Caesarstone in Misty Carrera: Emphasis on the “Misty,” this surface looks more on the grey side.

6) Stone Italiana in KSoul: Even though this is a teeny bit greyish, I think it’s quite beautiful.

7) LG Viatera in Bianco White: I actually like a higher-contrast look, so I’m a fan of this one.

So there you have it.  Love to hear from anyone who has experience with any of these — whether good or bad. 🙂

This entry was posted in Kitchens, Products We Love. Bookmark the permalink.

25 responses to “Countertops that look like white marble (take two)”